Two roads diverged in a wood, and I,
I took the one less traveled by,
And that has made all the difference.
~ Robert Frost

What does one do when one has a significant speech impairment, so impaired that few people understand Glenda-ish?

Why, I take the least obvious path and become a motivational speaker, of course! 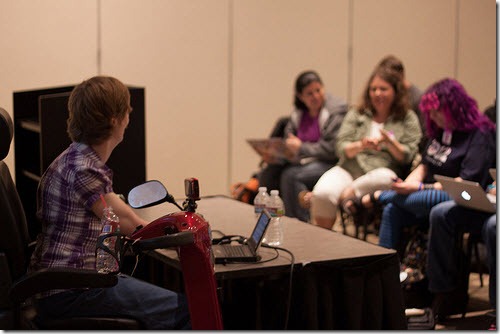 “I saw you speak publicly. If you remember, I just HAD to meet you afterwards. Definitely go for it. You have the personality and the chutzpah for it!”
~ Eva Anderson, Creative Director – Center for Health Literacy at MAXIMUS

My message is not “If I can do, you can too!” I find that message so arrogant because it does not acknowledge where you are in this moment, where you are headed or that you might not even desire to do when I have done. Each life is a unique journey.

Rather, by sharing my own unique life experiences, I would like to encourage, to entice, to motivate you to move forward, to go for it, to strive for your potential and to live life more fully.

What on earth pushed me to become a motivational speaker?

Gathered around the kitchen table, friends Bob and Pat mentioned they had spent a month in Whistler while their house was being renovated. I asked if they had done the zipline. They replied they had walked up as far as the ticket booth, but were too scared to go any further.

I pulled out my iPad and shared this video of me ziplining across downtown Vancouver during the Winter Olympics:

Getting there was the real challenge.

Zipping 140 feet above the crowds and traffic was not the only feat that mild winter day. Climbing the 81 steps up to the platform also took great effort.

You see, I held my breath for six minutes while making my entrance into this world. (If only I had known the importance of breathing!) As a result I have cerebral palsy, which affects my muscle coordination and balance. My physical movements are jerky and involuntary; one body part or another is in constant motion. I am not able to walk without support; I use an electric scooter for mobility. My left hand has some function and I type with only my left thumb, while my right hand is usually in a tight clenched fist. My head control is tenuous and swallowing takes conscious effort. My speech is also significantly impaired.

Can’t is a four-letter word!

But…all of that hasn’t stopped me! Fortunately, I landed in the right family where “can’t” was banned from our home. I was expected to try and to always do my best, which I have done repeatedly and have detailed in my bestselling autobiography I’ll Do It Myself.

Those 81 stairs weren’t going to stop me from being terrified spitless. Together, my lifelong friend, my cousin and I conquered that tower of stairs in a mere 30 minutes. 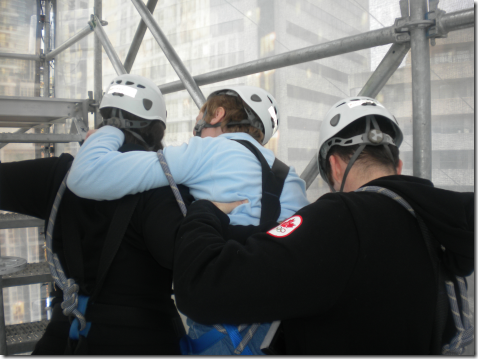 That day added even more colour to an already colourful life. I realized that I could stare fear in the face, go beyond it and survive…triumphantly. That realization was so liberating, so life-changing that the ripples from that day are still being felt and still being embraced.

Life is not a dress rehearsal. Go for it and live it…fully!

Back to sitting around that table with Bob and Pat…they were impressed by the video. Bob asked a few questions, then he turned to Pat and said, “Hmm, maybe we could do that.”

I heard the little voice in my head, although I am not convinced I did not exclaim it aloud because it was so clear, “THAT is what I want to do!”

THAT is, by sharing my own unique life experiences, I would like to encourage, to entice, to motivate others to move forward, to go for it, to strive for their potential and to live life more fully.

It doesn’t matter whether or not Bob and Pat actually do the zipline, but rather that next time they are standing on the edge of an opportunity and wavering, they go for it.

And THAT is what I would like to do for you, too.

“I haven’t done a zipline. And won’t. BUT, you often make me go for it.”
~ Jon Swanson, Executive Pastor – Grabill Missionary Church

Presentation Topic: Go Beyond: Stare Your Fear in the Face and Go for It!

Is fear holding you back from striving for your potential and living your life more fully? By sharing her terrifying yet exhilarating experience zip lining high above a downtown city block, Glenda demonstrates how to face your fear head on and going beyond to live a more fulfilling life. The goal is not to get you on a zip line (unless that’s you’re dying-to-but-terrified-of thing), but rather that the next time you are wavering on the edge of an opportunity, you boldly go for it!

Are you curious about me? 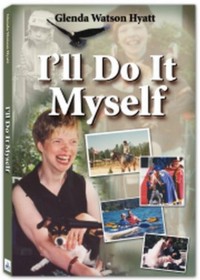 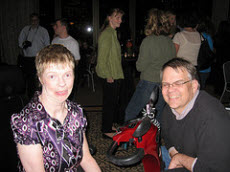 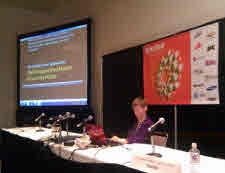 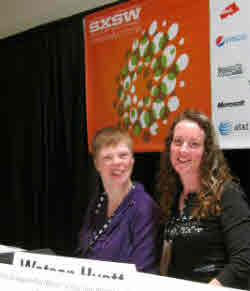